Get fresh music recommendations delivered to your inbox every Friday.

by Zing Along Ensemble 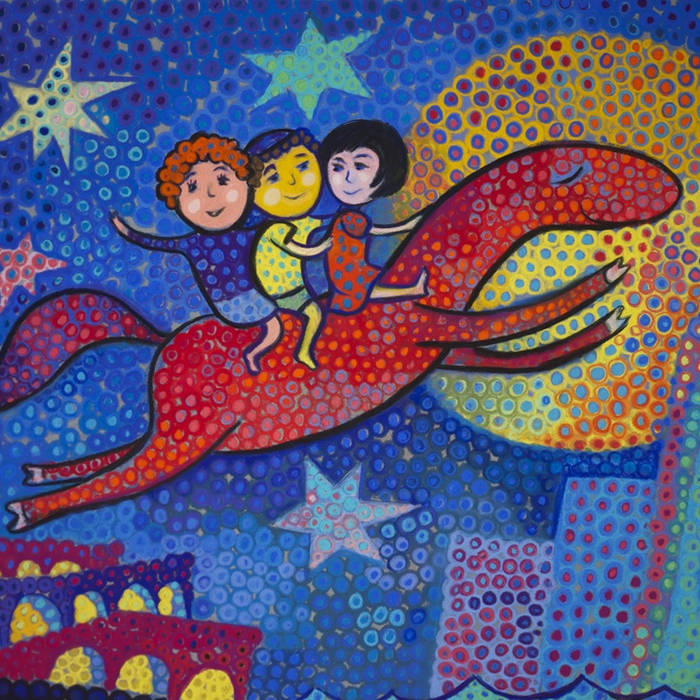 Zing Along Shabes is a companion musical recording to the Zing Along Shabes project, a set of materials to help families foster traditions around celebrating Shabbat, the Jewish day of rest.

The project consists of a website and printable booklet that include artwork by Irina Sheynfeld, a toolkit of materials for educators and parents, and musical recordings of songs, prayers and nigns for Shabbat (featuring the voices of Cantors Natasha Hirschhorn and Maria Dubinsky, the folk singer Inna Barmash, clarinetist Dmitri Zisl Slepovitch, violist Ljova Zhurbin, accordionist Patrick Farrell, bassist Mitya Ishenko, and a choir of 12 kids from the NYC Russian-Jewish community).

The project was made possible through a grant by the BluePrint Alumni Fellowship project of COJECO, funded by the UJA-Federation of New York and Genesis Philanthropy Group.

Zisl Slepovitch
Dmitri Zisl Slepovitch is a clarinetist, saxophonist, pianist, composer, and Yiddish singer, founder of Litvakus and Minsker Kapelye bands, an internationally acclaimed expert and instructor in Ashkenazi Jewish and Eastern European music, Yiddish Language and Culture Instructor at The New School (New York). He has performed and recorded with Michael Alpert, Paul Brody, Psoy Korolenko, Frank London, Selim Sesler, Yale Strom, and Theresa Tova, to name a few. Among his important musical contributions is co-arranging a score for the Itzhak Perlman and Cantor Itzchak Meir Helfgot album Eternal Echoes on Sony Classical, in collaboration with Prof. Hankus Netsky. As part of his BluePrint Fellowship in 2012/13, Zisl released a new album, RAYSN, with his band Litvakus, presenting the rarely heard music from the Yiddish/ Litvak and Belarusian cultures. dmitrislepovitch.com

Inna Barmash
Inna Barmash immigrated to the United States from Vilnius, Lithuania, where she first started singing in Yiddish in a children's song and dance collective. While a student at Princeton University, she co-founded the Klez Dispensers, the university's first klezmer band, led High Holiday services as a cantorial soloist and has since performed with numerous other klezmer and folk groups in the tri-state area. Her explorations of the repertoire of Russian and Romanian gypsies led to her co-founding of Romashka, a gypsy band based in New York. While roaming through clubs, cafe, and underground parties with Romashka, Inna encountered the composer/violist Ljova Zhurbin, her now-husband and collaborator, with whom she started Ljova & the Kontraband, an original chamber folk ensemble and a duo lovingly dubbed BarmaLjova. As a BluePrint fellow in 2012/13, Inna recorded an album of songs in Yiddish, drawing from songs collected in pre-war shtetls beyond the pale in Ukraine as well as from contemporary Yiddish art songs. www.innabarmash.com

Irina Sheynfeld
Irina Sheynfeld is a visual artist born in Odessa, Ukraine, where she studied painting at the Odessa College of Art. Upon arriving in New York, Irina earned her BFA from the Parsons School of Design and MFA from School of Visual Arts. Irina has also worked as a designer and illustrator for The Wall Street Journal, Time Warner and Oxygen Media. For several years Irina illustrated a weekly column for Editor and Publisher magazine. Recently, Irina had solo shows at Ceres, Tagine Gallery, Iridium Jazz Club, she also participated in many group shows and is a recipient of various grants and awards. A 2011/12 BluePrint Fellow, Irina created "Strange Pilgrims No More" (2011-2012), a series of portraits that serve as a collective portrait of Jewish women who emigrated to US from former Soviet Union.http://www.irinasheynfeld.com

Cantor Natasha Hirschhorn
Cantor Natasha Hirschhorn became interested in Jewish music during her studies at the Gnesin Music College in Moscow. After graduating with an Honors Diploma in musicology, piano and composition, she studied at the Kiev State Conservatory. Deepening her involvement in Judaism, Natasha also collaborated with the Kiev Jewish Youth Musical Theater as pianist, singer, and later, music director. Since coming to the US, she has taught about Russian Jewish culture in multiple settings, including the North American Jewish Choral Festival, the National Havurah Committee Summer Institute, Limmud UK and NYC, and the first Limmud for Russian-speaking Americans. She is currently developing new programming for Russian-speaking Jews at Congregation Ansche Chesed, where she has been Music Director and Hazzan since 2003. www.cantornatasha.com

Cantor Maria Dubinsky
Cantor Maria Dubinsky was born in the former Soviet Union and emigrated to Israel from Moscow in 1990. She attended high school in Tel Aviv, and after service in the Israel Defense Forces, Cantor Dubinsky earned her bachelor degree from the Rubin Academy of Music and Dance in Jerusalem. She began studies at the Hebrew Union College-Jewish Institute of Religion School of Sacred Music in 2005 and was invested as cantor in 2010. Cantor Dubinsky serves as assistant cantor at Temple Shaaray Tefila on the Upper East Side in Manhattan and previously was the cantor at North Shore Synagogue in Syosset, NY and student cantor Union Temple in Brooklyn. In addition to her worship leadership, Cantor Dubinsky has taught students of all ages and has led Pesach services in the FSU, as well as volunteering at elder hostels and for the Israeli police force.

Lev 'Ljova' Zhurbin
Hailed by the New York Times as “dizzyingly versatile… an eclectic with an ear for texture… strikingly original and soulful”, LJOVA (Lev Zhurbin) was born in 1978 in Moscow, Russia, and moved to New York with his parents, composer Alexander Zhurbin and writer Irena Ginzburg, in 1990. He divides his time between performing as a violist in diverse groups ranging from his own, LJOVA AND THE KONTRABAND, to string quartets, jazz combos and Gypsy bands; arranging music for Yo-Yo Ma, the Kronos Quartet, Gustavo Santaolalla, Osvaldo Golijov, Alondra de la Parra and others; and composing original music for film, TV, dance, and the concert stage. Recent commissions have included projects with the string quartet Brooklyn Rider, choreographer Aszure Barton, and filmmaker Josef Astor. www.ljova.com

Patrick Farrell
Patrick Farrell is an accordionist, composer and bandleader based in Brooklyn, NY who has been described as a “wizard” (Feast of Music) and as a player of “mordant wit and blistering speed” (Lucid Culture). He is an integral part of the international klezmer community, plays with "new music" and improvisational weirdos, and enthusiastically toots on an alto horn in various brass bands. Farrell has appeared on over 30 recordings, most recently with Yo-Yo Ma and the Silk Road Ensemble and Benjy Fox-Rosen, and also enjoys working with dance and theater ensembles as a composer, music director and accompanist. www.pattysounds.com

Mitya Ishenko
Dmitry Ishenko (bass) is a versatile and in-demand New York City bass player. He has performed and recorded with such jazz greats as Steve Lacy, John Tchicai, Myron Walden, Roy Campbell, Jr., Sam Yahel, Joe Lovano, and many others. A graduate of both the Berklee College of Music and New England Conservatory of Music in Boston, Dmitry has performed all over Northern America, Western Europe, Russia, and Japan.

Zing Along Shabes is a companion musical recording to the Zing Along Shabes project, a set of materials to help families foster traditions around celebrating Shabbat, the Jewish day of rest. The project was created by Inna Barmash, Dmitri Zisl Slepovitch and Irina Sheynfeld. ... more

Bandcamp Daily  your guide to the world of Bandcamp